Alex Maciver has become infamous since his arrival in Perth for turning a wry eye on the city’s cultural lag. Geography does matter in art: particularly social and cultural geographies. Generally, the further you go from major cities, the more conservative art becomes. There is a reasonably large body of contemporary art made in Perth, but this is rarely seen outside of the centre of the city. In a parallel operation, there is a whole gamut of art created in the major cultural powerhouses of other, more cosmopolitan cities, where contemporary art’s value and audience contribute to its development, that we never see here, except online. There is a tinge of conservatism to much that is made here, along with an unwillingness to offend or displease. It is pervasive – even in the contemporary art world. Maciver, arriving without any contact with this culture, or perhaps simply with his character, has no such hang-ups, and his work therefore often comes like a breath of fresh air.

It could be said, though, that painting is a conservative act–and most of this new show is set in that medium. But it is because of this very conservative perception (and production) of painting that Maciver’s work is important, and interesting. It is often by utilising the most traditional of materials that the issues associated with that tradition can be most successfully addressed. Maciver’s work appears to be something like a critical attack on two directions painting seems to travel in, here: the serious painterly abstraction, and the overwrought figurative. Abstraction, of the AC4CA variety, is the more typically highly critically regarded, while community art prizes and centres that are filled with pictures of roses are extremely prevalent. 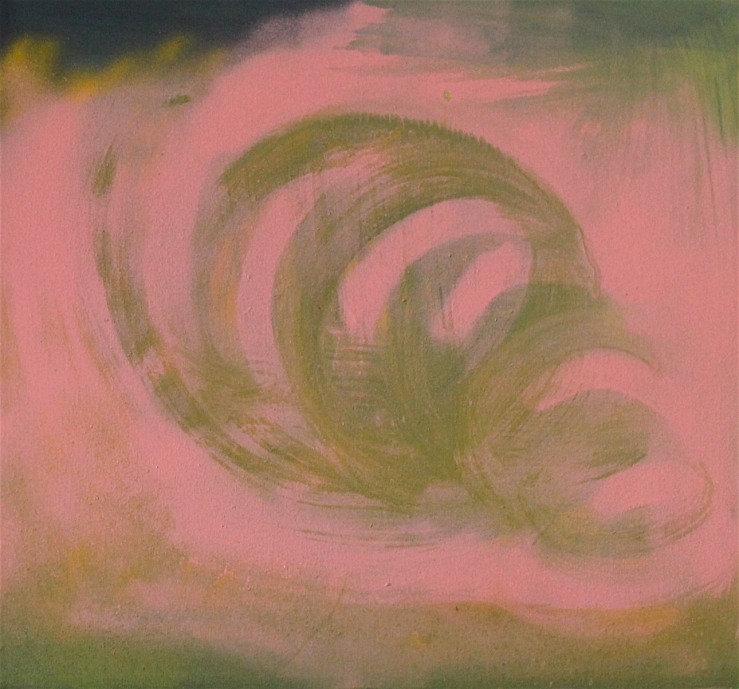 Crop circles is maybe the most emblematic of Maciver’s humour in addressing the typical figurative and abstract content of these painting styles. It is a simple scribbled spiral of paint, yet it declares itself a kind of landscape – but also a peculiar, kitsch, false landscape that is land art with a sense of humour – certainly no plains of arid, Australian soil. It is almost a leap too far to suggest that these spirals are anything other than scribbles of erased paint. Yet the simultaneous implication that this painting, by being a trivial scribble of paint, is not what its title claims it to be, but that what it claims to be is a crop-circle: one of those signs of false alien invasion, that pranksters and humourists makes, gives us the most accurate vision of the dynamic of Maciver’s work: as the creation of a mythos around false signs.

All through this exhibition he uses the paraphernalia of titling and painting to corrupt our understandings – on what could be understood as the lowest and basest of registers – but to great effect. No matter where we look, it seems as if Maciver is laughing at us. While we take his paintings seriously, or dismiss them for not being serious enough, they maintain a certain disregard for seriousness altogether. Their humour might be passed off as trivial, but it is in fact duplicitous. This character is what makes them important as art; that they render such stable ground as painting unstable and difficult to navigate.

It is also worth mentioning that it does not seem to be immediacy that informs his work, but flippancy. Unlike Cy Twombly, whose work Crop Circles reminded me of, there is something insulting about the rapidity and carelessness apparent in the work in this show. This work is unconcerned with the viewer’s desires, or at least wants to be perceived as not caring, whereas it also obviously cares deeply about showing up what we do desire; but it does not play into the wish for something incredible to be put on display. Sometimes the works are incredible anyway, but they do not exhibit the characteristics of trying to impress that defines much overwrought painting.

There are also instances of excavation of cultural mores, something that seems related to his exhibition at Paper Mountain ‘I may live on as a ghost’ in 2013. Much of his abstraction evolves into a figurative form, corrupting the ‘purity’ of its form. Roses, a face, some trees, they appear out of the enamel, fluoro gloom of his abstract workings. The people that Maciver seems most comparable to in doing this are the more serious jokers of late twentieth century art – Jasper Johns and Robert Rauschenberg. Their legacy is undervalued in our city, and their intelligence and wit, and willingness to make fun of the delusional mythic seriousness of the painter (particularly the abstract expressionists who came before them) is something worth learning from. (The current obsession with Gerhard Richter and Luc Tuymans is worth challenging on similar grounds). Maciver’s images are like half-remembered things, they rise incomplete, and our half-recognition of faces and roses and trees and people and a landscape all seem like the tropes of the pop-imagery of yesteryear. They are a use of the flotsam and jetsam of painting and abstraction. They are similar to the flippant devices of Maciver’s abstraction, but at work on the figurative, making basic, unrecognisable faces, stealing from colour-by-numbers books, and making ubiquitous palm trees silhouetted against a poison sky. All his scanned hand gestures downstairs seem related to this – the most typical and easily copied of gestures, indicative of a language, and in their copying, undoing it.

Maciver’s work raises the ire of many people, and it makes me happy that it does so. At the artist’s talks a painter said that he called his works ‘landscapes’ quite seriously, and Maciver, ever so polite, tried to indicate that his work, which he calls ‘landscapes’ in irony, was not an attack on him personally – though of course, we cannot deny that it is and was an attack. Hopefully some of the humour of Maciver’s work will slowly infiltrate or frustrate the continued machinations of our conservative, serious painting world.