I close my blinds at night, so that people cannot look in to my apartment. I conversely love glancing into the windows, closed or open, of other people in the city at night. The golden glow of houses, whose occupants have returned for the night, always gives me a sense of narrative expectation: that there is something else happening, behind those blinds, and if I just stepped a little closer and peeked through them, I would find anther person’s life.

There are two small drawings at the back of the room that I would like to begin with. They are exceptional for their modesty. They display precise grids and circular geometric structures, interrupted by a stippling of dots and a hash of shading. They are pencil, and folded paper: the simplest of gestures to be performed on paper. They are filled with tentative marks, yet direct lines: they are vectors of uncertainty and yet are possessed by inevitability. Although they and the blinds are quite disparate, they both appear interested in depicting operations, a passage through the world that is somehow mathematical and yet totally unknowable. If they are, what are these drawings diagrams of? It would take a mathematics of feeling to know. Like Agnes Martin, there is only the logic of the spirit at work in these careful designs. Unlike Martin, there is less of an interest in perfection in these small works. The spirit is not elevated, not purified. It is perhaps a wise choice, to understand that life is messier and more complex than Martin gave it the appearance of being. Without doing as Martin did and removing yourself from life, you are left with a chaotic mechanics. It is not the mechanics of a false reality, something of a fantasy or myth like Martin’s, but diagrammatic of the world we live in. To this extent, they appear to be images of something, though they are abstract. Their motifs, like Martin’s Untitled (study for the ‘egg’), appear to refer to something else, and however spiritual it is, it is also a very real thing. 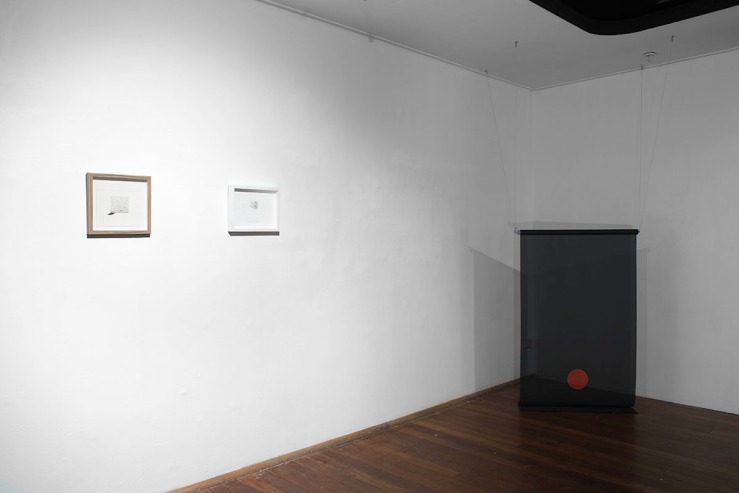 The Spanish, underneath them, reads, ‘Where to run away? You fill the world. I can only run away into you’. Though it appears bittersweet on the first read, there is something threatening in it as well. Though the sentiment of running away only into someone else appears to draw from the cliché idea about someone who is someone else’s whole world, there is something decidedly less trite about the claustrophobia and omnipresence implicated in the need to run away. The drawing above is a circular vector: is it the world? Gradually overtaken by small stabs of pencil? Are those the paths of satellites above its one-inch surface? Those eyes, always in the sky. I am inadvertently reminded of Holly Herndon’s love song to the NSA. Despite its diminutive size – or maybe because of it – there is the possibility of love and oppression being bound up in one in this small diagram: just as Herndon reminds us in ‘interface’, the personal is geopolitical. 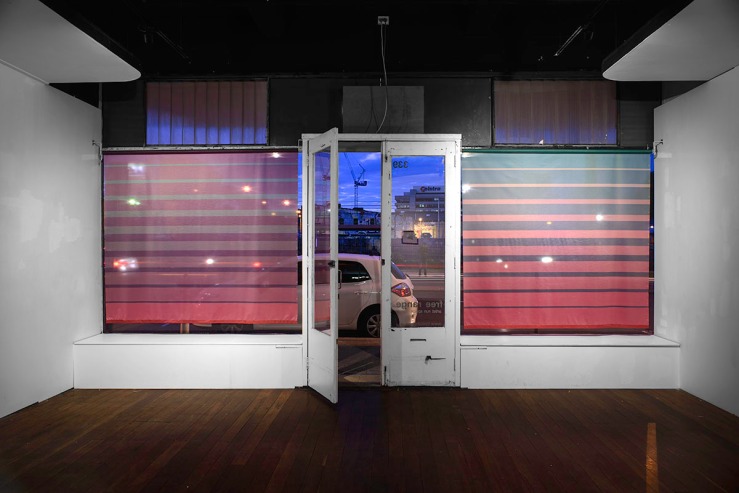 The blinds meanwhile hum and shudder and roll themselves up and out, furl and unfurl. They are hiding something and showing themselves simultaneously, their jarring colours overlaying the afternoon sky with yet more, less savoury hues. They are also interestingly comparable to Agnes Martin’s bands of coloured bands (such as The Wedding (idea) ). They are similarly more concerned with an external reality, and their exacting, mechanically printed bands of colour are interrupted by the passage of people on the street behind their semi-transparent fabric. The bands delimit a certain time and space as they fall and rise, and every so often, you look over your shoulder at a flash of light, you see that a lamp has been turned on by an invisible hand. Everything is automated, and like the drawings, operate like vectors in space–though this time a physical rather than imaginary one. Though not a radical intervention, they demonstrate an engagement in space, particularly the space between the out there and the in here. The blinds are designed to be malevolent, and they perform the function well – they alienate, not only through covering and revealing indiscriminately, but also by their self-empowerment. Though programmed by the artist, they rise and fall out of our own control.

These works all seem to be drawings and installations about something going on elsewhere. They never point to themselves. They remain opaque, looking and directing our attention to other things–whether they be the people on the street, or the messy personal lives we all lead. We sense that the truth is buried somewhere, but the map is indecipherable.This show gives off the same air of finding that a conspiracy is going on, but its extent and influence are totally unknown to you. As Thomas Pynchon describes, in The crying of lot 49, ‘A revelation trembled just beyond the threshold of her understanding’. You feel slightly naked, and exposed, even when the blinds are fully closed. 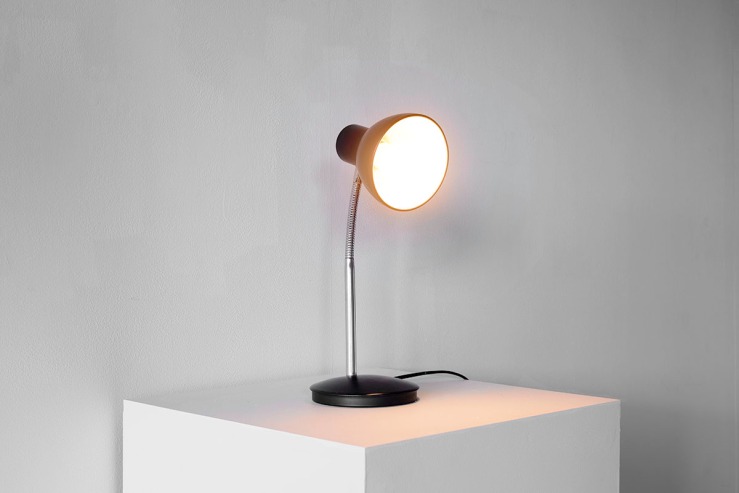